In Midnight Club 3: DUB Edition, the 1964 Chevrolet Impala is classified as a Class D muscle car and has a total of 4 gears. It is featured on the loading screen for the American Royalty Car Club races. It is also one of the four or five (DUB Edition) cars the player can choose as their first car.

The Chevrolet Impala is a full-size automobile built by the Chevrolet division of General Motors introduced for the 1958 model year. Deriving its name from the southern African antelope, Chevrolet's most expensive passenger model through 1965 had become the best-selling automobile in the United States, competing against the Ford Galaxie 500 and the Plymouth Fury when full-size models dominated the market. The Impala was distinguished for many years by its symmetrical triple taillights.

For 1964, the Impala was slightly restyled, reverting to a more rounded, softer look. The signature taillight assembly had an "upside-down U" shaped aluminum trim strip above the taillights, but the lights themselves were surrounded by a body-colored panel. The 409-cubic-inch (6.7 L) returned as the big-block option, as well as the 2X4 carburetor setup for the 425 horsepower motors. SS models continued to feature the engine-turned aluminum trim. Rooflines were carried over from '63 unchanged. Back-up lights were standard.

A Chevrolet Impala in the garage in Midnight Club 3: DUB Edition.

A modified Chevrolet Impala on the streets of Detroit (possibly) in Midnight Club 3: DUB Edition.

The Impala unlocked from the Time Trial in Midnight Club: Los Angeles.
Add a photo to this gallery

The 1994 Impala SS went into production on February 14, 1994 at GM's plant in Arlington, Texas and was almost identical cosmetically to the concept car, the only noticeable change being the chromed bowtie logo on the grill (vs a red logo on the concept). The car was, in essence, a high-performance version of the Caprice. From a mechanical standpoint, it used the Caprice police package as its base and as such got most of the equipment formerly available only to law enforcement and government agencies. This included a sport-tuned suspension with reinforced shocks and springs, a high-capacity reverse flow cooling system (derived from the Corvette's LT1), larger four-wheel disc brakes, transmission cooler, dual exhaust, a higher-output electrical system, and other minor mechanical alterations.

Before these police Chevrolet Impalas in Midnight Club 3: DUB Edition are unlocked, they will be encountered in many races throughout the cities driven by NPCs and are obviously used to make races much tougher. An NPC driving a cop car will almost always chase the first racer to pass their hiding or waiting spot. This can be used to the player's advantage as they will try to use the PIT Maneuver to pull the racer to the side of the road. However, this is not always the case. Majority of the time, especially if you are 1st place, YOU will be the one being chased. This can be quite a challenge as the officer will not only yell warnings at you, but use the PIT Maneuver to swerve you into traffic or other hard obstacles. They will always quit chasing the player if they gets too far away or reaches the finish line. However, if a cop had to lose sight of the player and the wanted level goes away, the cop will reappear somewhere within the player's path and chase the player again. Usually in most races, there is only one NPC cop that will chase the player, however, in some races there are two or more within the race though they may not all be together. NPC Cops are also traffic vehicles especially in San Diego. To tell the difference between the NPC cops that chase the player and the NPC cops that appear in traffic (mostly accidents) is by looking at their appearance. NPC cops that chase racers look like the real Chevy Impala SS with police livery, while the traffic NPC cops look a little more like traffic cars with less design in them than the other NPC cops. Traffic NPC cops will never chase the player or other racers and are usually on their way to car accidents or already at car accidents. Traffic NPC cops also can be found in groups parked near each other. There is usually an NPC cop here in front of them that will chase racers speeding past them. If crashed into hard enough, as with other traffic cars, they will have dents in them and put on their hazard lights.

In Midnight Club: Los Angeles, Chevy Impala SSs are mostly found patrolling the streets of Los Angeles during cruise mode, unlike in Midnight Club 3: DUB Edition where they only appear in races (both NPC cops that chase the player and traffic NPC cops). They will chase players who speed past them and attempt to pull them over. If the player gets pulled over and does not escape within a few seconds, they will be busted (arrested) and lose money. Because of this, it is wise to slow down or completely stop when in a cop's area during cruise mode and then pick up speed after getting quite a distance from him. Some police Chevy Impala SSs appear in races (possibly).

In both games, to turn on the siren for the cop versions of the Chevrolet Impala SS, they must press L3, which is the horn button. It is to note that the player cannot race in a cop vehicle in both games unless the race is played in arcade mode. 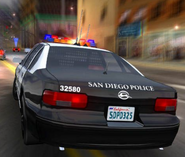 Two NPC traffic police in San Diego with an NPC cop parked in front of them.

Front view of a Chevrolet Impala SS traffic taxi on the streets of Los Angeles in Midnight Club: Los Angeles.

A LAPD Chevrolet Impala SS. This is in Midnight Club: Los Angeles.

A California Highway Patrol Chevrolet Impala SS on the streets of Los Angeles. This is in Midnight Club: Los Angeles.

Two LAPD Chevrolet Impala SSs give chase in Los Angeles. This is in Midnight Club: Los Angeles.
Add a photo to this gallery

Retrieved from "https://midnightclub.fandom.com/wiki/Chevrolet_Impala?oldid=13954"
Community content is available under CC-BY-SA unless otherwise noted.