The McLaren F1 LM is a vehicle available in Midnight Club 3: DUB Edition.

The player can purchase this vehicle after getting Class A for $250,000.

The McLaren F1 was the fastest production car, until it was beaten by the Bugatti Veyron. It has a 7 Figure Price Tag. 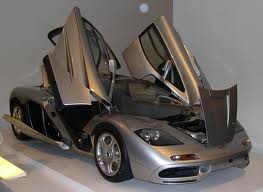 There are 2 Confirmed Variants.

This is the LeMans Racing Version.

The McLaren F1 is an incredibly fast exotic car, almost as fast as the Pagani Zonda and the Chrysler ME Four-Twelve. It also has a high acceleration, meaning it can pick up speed very quickly. However, the car suffers from a low suspension and poor handling. Players who are not careful turning with this car may find themselves crashing or even flipping the vehicle over a lot, which can cause great damage to the player's current position in a race.

The F1 LM is known to hit speeds over 270 mph if NOS is engaged in 4th or 5th gear. Although the speedometer only reads up to 250 mph. 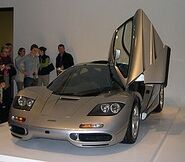 Rear view of an in-game McLaren F1 LM racing near the Petco Park in San Diego.

An in-game McLaren F1 LM racing in Detroit with a Detroit Police car chasing behind it.

A McLaren F1 LM next to the statue in the San Diego temple area
Add a photo to this gallery
Retrieved from "https://midnightclub.fandom.com/wiki/McLaren_F1?oldid=12936"
Community content is available under CC-BY-SA unless otherwise noted.